WSECS is always a welcoming conference, but being able to present with another equine historian this year was a joy. I presented on various re-imaginings of the baroque “tiger” horse, and Janice presented on the development of a divide in medical knowledge between riders and Albeytar in Castile. We had a small but astute audience, and a lively conversation after our papers that ranged seven centuries and four continents. Between the two of us, we could answer most questions, but it was especially wonderful to be able to suggest other equine history specialists. For this question, Kathryn Renton, for that one, Hylke Hettema, and for this read Sandra Swart’s latest. We are no longer silos!

And, of course, to be able to announce the first EHC conference. 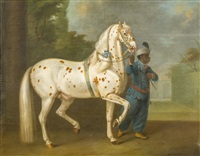 “Before we start, I’d like to say a few things about our third presenter, who unfortunately could not be here today. I spoke with Dani about her project last year, when it was a mere glimmer of an idea. What I found exciting, and why I invited Dani to be a part of this panel, was that she is working on the transmission of equestrian culture between Italy and Germany (or rather, Italian and German) directly, rather than via France. French horsemanship has dominated our field. Much of medieval and early modern equestrian culture in Europe was centered on France. So much so that, even though modern Olympic dressage is very much based on the 19th c German model, the language remains French. We still speak of piaffe and passage, levade and capriole. Cavendish opened his 1667 treatise with a geaneology of horsemasters, and in it quips that “the French think, That all the Horse-manship in the World is in France.”  Within equine history, it is all too easy to replicate this focus. However, while French riders, and French writers- Cavendish himself wrote his treatise originally in French- may have claimed primacy, they were not the only agents. Today we will try to tell some different stories.

Given the theme for this weekend, I will be covering a rather long period of time, from the Baroque to the modern. I will begin with the baroque “tiger horses,” and then show three ways in which they have been reimagined, and recreated. In modern parlance, baroque breeds are those that are heavier than the typical warmblood, but without being draft-like. The Iberian breeds and the Friesian are easily recognized as “baroque,” despite the former predating that period and the later being comparatively young in its current form. The Knabstrupper has a “baroque” registration category, despite having a well-documented 1812 foundation date. Tack and riding styles likewise have forms described as “baroque,” despite often being only tangentially related to that time period. They are based, not on the history of a single moment in time, but rather on the layers of memory that have accrued upon that moment. Each layer adds strength to the memory, even as it obscures the lives and events being recalled.”

Today was far to bitter cold to ride, so we had a little visit to the Washington County Museum of Fine Arts. The WCMFA is free (donations welcome) and located in Hagerstown, MD’s city park. It is a small museum, but well organized and worth a visit if you’re in town.

About half the galleries have detailed plaques like this, including acquisition information as well as artist name, creation date, and background. 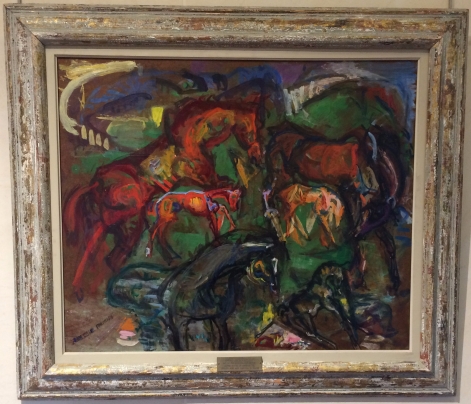 Unsurprisingly, this “Cheval Turk” statuette was my favorite: 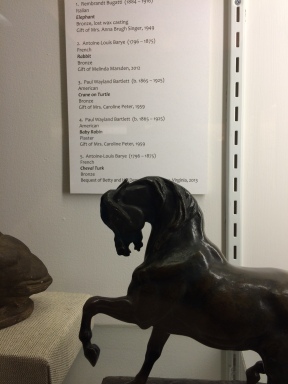 The last (or first, depending on your direction) gallery is art from local kids. There were a lot of ponies!

Many horsefolk have expressed confusion or outright disbelief at the extreme angle (or rather, lack thereof) of the hindlegs in paintings of horses in capriole. The works of Johann Georg de Hamilton (d. 1737), in particular, receive a ton of comments about how ‘unrealistic’ or ‘impossible’ the position is. While his work may be idealized, it’s not unusual for the period, and he may receive the bulk of the commentary only because his works are in full vibrant color, and widely accessible.

I think this position looks strange only because it’s unfamiliar. We’re used to seeing horses buck or jump with their legs folded, like these:

We don’t often see a spectacular buck like this, especially outside the rodeo ring: 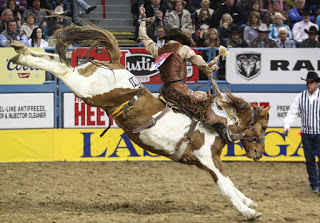 And although it’s becoming more common again, we also don’t often see a horse that has actually been trained to capriole. And as difficult a maneuver as it is (and some may argue that ethical training makes it more difficult to achieve consistent results, although 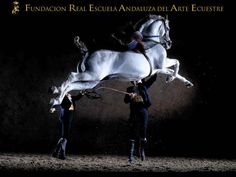 it makes it much easier on the horse!), even if we do have the opportunity to see a horse in capriole, it may not be as precise or extreme as those painted by Hamilton. The hind legs may hang slightly loose and low, like this (though in some cases, this is actually due to the difficulty of timing the photograph):

There are, however, now plenty of photographs of horses in the extreme version of capriole painted by Hamilton.

Art is often discarded as “unrealistic,” but is well worth examination as a source.