Many horsefolk have expressed confusion or outright disbelief at the extreme angle (or rather, lack thereof) of the hindlegs in paintings of horses in capriole. The works of Johann Georg de Hamilton (d. 1737), in particular, receive a ton of comments about how ‘unrealistic’ or ‘impossible’ the position is. While his work may be idealized, it’s not unusual for the period, and he may receive the bulk of the commentary only because his works are in full vibrant color, and widely accessible.

I think this position looks strange only because it’s unfamiliar. We’re used to seeing horses buck or jump with their legs folded, like these: 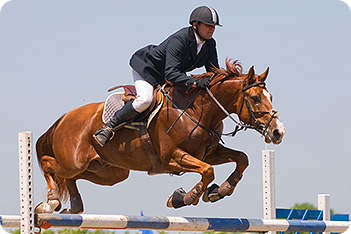 We don’t often see a spectacular buck like this, especially outside the rodeo ring:

And although it’s becoming more common again, we also don’t often see a horse that has actually been trained to capriole. And as difficult a maneuver as it is (and some may argue that ethical training makes it more difficult to achieve consistent results, although

it makes it much easier on the horse!), even if we do have the opportunity to see a horse in capriole, it may not be as precise or extreme as those painted by Hamilton. The hind legs may hang slightly loose and low, like this (though in some cases, this is actually due to the difficulty of timing the photograph):

There are, however, now plenty of photographs of horses in the extreme version of capriole painted by Hamilton.

Art is often discarded as “unrealistic,” but is well worth examination as a source.